Across the entire northern hemisphere, ice and snow are retreating in front of an invading green army as warmer climates turn once-freezing tundras into temperate shrublands.

A new analysis of satellite data collected since 1982 has revealed a vigorous increase in vegetation growth between the 45th parallel north and the Arctic Ocean over the past 30 years. Based on NASA’s Vegetation Index, this map shows areas where plant growth has increased in green and blue and areas where it has decreased in orange and red. Green quite clearly wins.

Vegetation in these regions now covers 9 million square kilometres, roughly the size of the US and over a third of the 21 million square kilometres that were analysed. In many places, the climate has shifted north by as much as 4 to 6 degrees of latitude and now resembles what was found 400 to 700 kilometres to the south in 1982. The researchers predict that by the end of this century northern Sweden could get temperatures more common to southern France, making it warm enough to grow grapes.

But the global greening might be only temporary, with the future looking brown. If temperatures continue to rise there could be a greater risk of fires, pest infestations, and drought. Indeed, the march of the plants may already be slowing – the researchers report more vigorous growth between 1982 and 1992 than between 1992 and 2011. 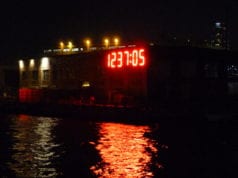