Modern wheat is a “perfect, chronic poison,” according to Dr. William Davis, a cardiologist who has published a book all about the world’s most popular grain.

Davis said that the wheat we eat these days isn’t the wheat your grandma had: “It’s an 18-inch tall plant created by genetic research in the ’60s and ’70s,” he said on “CBS.

“This thing has many new features nobody told you about, such as there’s a new protein in this thing called Gliadin. It’s NOT gluten. I’m not addressing people with gluten sensitivities and celiac disease. I’m talking about everybody else because everybody else is susceptible to the gliadin protein that is an opiate. This thing binds into the opiate receptors in your brain and in most people stimulates appetite, such that we consume 440 more calories per day, 365 days per year.”

Asked if the farming industry could change back to the grain it formerly produced, Davis said it could, but it would not be economically feasible because it yields less per acre. However, Davis said a movement has begun with people turning away from wheat – and dropping substantial weight.

To avoid these wheat-oriented products, Davis suggests eating “real food,” such as avocados, olives, olive oil, and vegetables. “(It’s) the stuff that is least likely to have been changed by agribusiness,” he said. “Certainly not grains. When I say grains, of course, over 90 percent of all grains we eat will be wheat, it’s not barley… or flax. It’s going to be wheat.

Some health resources, such as the Mayo Clinic, advocate a more balanced diet that does include wheat. But Davis said on “CTM” they’re just offering a poor alternative.

“All that literature says is to replace something bad, white enriched products with something less bad, whole grains, and there’s an apparent health benefit – ‘Let’s eat a whole bunch of less bad things.’ So I take…unfiltered cigarettes and replace with Salem filtered… 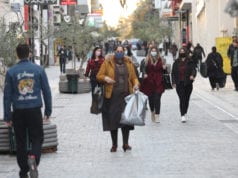